Many of you have written to tell me how much you enjoy my women of substance series, and today’s post is a continuation of this tradition featuring the incredible Laura Smith.

Laura is an entrepreneur, geological engineer, sailor, and fearless adventurer.  (She is also Mr. Magpie’s cousin, though this is–sorry to say it, Mr. Magpie–the least impressive item on her resume.  Read on and you’ll know why.)

After graduating from Princeton in 2005, she taught English at a community college in Vietnam before starting to work for WesternGeco in offshore marine seismic operations, collecting information about the subsea surface for oil and gas exploration.  She started as a trainee, leaned in, and worked her way up the chain of command to operator, then shift leader, then department chief, and finally “party chief,” or boss of technical operations for the entire boat.

She was the first woman in 15 years to hold this position, and the youngest of her peers by at least 10 years.

She would typically spend five weeks aboard the boat, then five weeks off, and her work took her all over the world: she visited the waterways around India, Qatar, Equatorial Guinea, Cameroon, Ghana, Congo Brazzaville, Angola, Norway, the UK, Canada, the US, and Mexico.   She also made a transit from Dubai to Malta via the Gulf of Aden during the height of piracy.

I’ll let this information sink in for a minute.

While I am shuffling around in my slippers, tapping on a keyboard for a living, Laura has been wearing steel-toed boots on a rig in the middle of the ocean, running the boat’s technical operations and managing a large crew (mainly comprised of men well her senior) on a daily basis and even contending with the possibility of having her boat taken over by pirates.

More recently, she and her husband purchased a 65-foot sailboat named Ocean Tramp, founded a sailing expedition business, and started taking fellow adventurers and scientists out on trips to Antarctica.  When not sailing, they live in Ushuaia, Argentina–the southernmost city in the world. {Laura and her husband, Fede.} What a colorful life–a life spent coloring outside the lines.  And yet, Laura is just about the most unassuming person you’ll meet.  She’s fearless and brave, yet without the bravado you might assume would accompany these traits.  She is down-to-earth, approachable, an easy conversationalist–and, at the same time (possibly my favorite trait of hers)–quick to engage and enthuse.  She’ll dial in on the small and trivial excitements of competing in a board game or finding the latest and greatest in outdoor gear or tracking down a piece of clothing she desperately wants all the way in the middle of Antartica (as you’ll learn below–like most of us women, once she finds an article of clothing she *needs,* she’ll move mountains–or cross oceans–to make it happen).  She takes in life’s details in big gulps.

When I think of Laura, I think of the tagline she used on a personal blog she used to pen (sadly now defunct, though you can follow along on her sailboat’s blog instead):

“Staying in one place is difficult.”

She is a true wanderer, a defier of conventions, a free spirit.  I’m lucky to know her and luckier to call her family.  She has the kind of pluck I hope mini one day displays.

Get to know Laura better by checking out her company, Quixote Expeditions, or, better yet, booking a trip with her.  (Once-in-a-lifetime, bucket-list material, right there.)

Or–my preferred way to share the surprising and interesting personalities of these women of substance–check out her answers to my Proust Questionnaire:

Your favorite qualities in a woman.

I have one fictional and one real…

Fictional: Charlotte Doyle, from the young adult book, The True Confessions of Charlotte Doyle, by Avi.  She is a passenger on a sailing vessel in the 1830s.  By the end of the trip, after a mutiny, she is captain -– fanciful, but it started me sailing on tall ships when I was a teenager and got me interested in maritime history.

Real: Nannette Evans, fife teacher and organizer with her husband of the Patriots of Northern Virginia.  She was the epitome of a strong and confident woman.  You did not mess with her.  She kept order, but everyone respected her–and in the end we were a well-formed marching group.

I probably talk too much.

I’m confident and very good at synthesizing information and then communicating it.   When there are crises, I’m good at taking in information and then disseminating the correct information up and down the chain to keep people at the correct level of being informed.  I love being a manager.  I love directing and guiding my team, both in training and mentoring as well as working together on larger projects.  I derive a lot of satisfaction from managing and I think do it pretty well.

Your idea of happiness.

The satisfaction of a challenging job well done.  Going on a long multi-day hike up in beautiful mountains.  Being at home for Christmas and playing games.

Your idea of misery.

Luckily, I’ve been spared any sort of intense misery in my life, but more superficial misery?  By day four of crossing the Drake passage coming back from Antarctica, I’m ready to be done.  It can get long and lumpy.

Currently at the top of your shopping lust list.

Our most recent guest scientist had this fantastic Patagonia backpack that I really liked – it was brightly colored, waterproof, and had cool side zippers.  It is the “it” bag, but at the moment I just have too many backpacks to justify another one!

Uh oh – is this a trick question?  I might be a Fashion Magpie Failure since many mornings I barely brush my hair.  So if I were on a desert island, I would put my hair in two pigtail French braids.  I should probably have some sunscreen, but I hate oily sunscreens – can the Fashion Magpie give me some suggestions?

The last thing you bought.

I didn’t buy it, but I think it counts… a fellow Antarctic tour operator had these adorable t-shirts featured on their site.  Many Antarctic t-shirts and paraphernalia is quite touristy, and definitely not cute.  This shirt, however, had a nice female cut and a classy penguin, but you could only buy it at their base camp on Union Glacier in the middle of Antarctica!  By the end of the sailing season (March), I was still thinking about the shirt I had seen on their Facebook post in December, so I emailed to see if there was any chance I could get a hold of one, even though it was the end of the season and I hadn’t actually gone to the middle of Antarctica to their base camp.   I was in luck: they had one left that they are bringing to me when I see them at our next Antarctica meeting in a few weeks!  Never hurts to ask.  The worst possible outcome is the answer is no, which is where you started in the first place.

I feel most empowered wearing…

Not a typical answer, but I’m not sure any are:  I’m most empowered in orange coveralls, a hard hat, and steel toed boots.  You’ll never feel stronger.  That being said, when I am in a more formal environment — an office setting or attending  a meeting or conference, which doesn’t happen that too frequently — I make a point to dress up more than one might expect, as I rarely get to do so.

10 Books that Will Change Your Life, and I read a book off the list already!

Finally, some outdoor Magpie picks inspired by the adventurous Laura.  You can click on the items in the collage below, or check out the links at bottom: 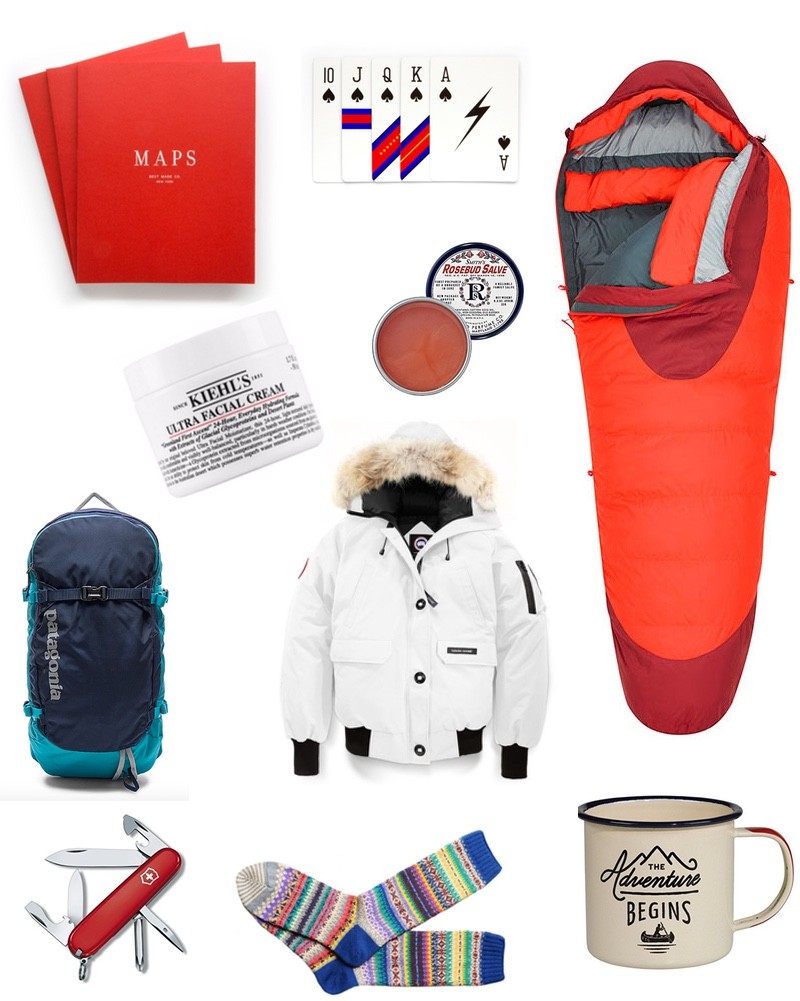 Also–a few of my go-to outdoor pieces: my favorite fleece (I own it in the “raw linen” / oatmeal color); my favorite wind-breaker for hiking/running (I own it in the “platinum” color); the backpack I plan on buying next time I head back to Aspen (I already bought minimagpie the mini sized version); the warmest socks ever (I live in these for seven months of the year in Chicago).