We started feeding minimagpie her first bites of real food when she was just shy of five months.  A lot of mamas start their babies on infant cereal (I believe this is what my mom did), but we decided to start mini on fruits and vegetables that were soft and mashable or that we could steam into a pliable consistency — for inquiring minds, this has included (thus far) bananas, avocado, carrots, sweet potato, pear, apple, and blueberry.  My mom has also strongly encouraged we introduce her to vegetables with more…strident flavor profiles, like peas and green beans, so those are next on my list.  Following my pediatrician’s suggestion, we’ve been feeding mini the same single fruit for a few days in a row before moving onto the next one to make sure there aren’t any allergies or reactions.  This has the dual benefit of preventing too much waste, since minimagpie literally eats about a teaspoon at each sitting.  Which is shocking because what these itty bitty amounts of food have done to her diaper situation are frankly mind-blowing.

Mini’s been lukewarm on most of these fruits and vegetables, cottoning most strongly to pear out of the bunch, and overall more interested in teething on the spoon than in the food going into her mouth.  My sister helpfully suggested that maybe she’s more of a savory gal, so I am now doing research on how to best prepare meat purees for an infant.

I’m intrigued to hear how you mamacitas approached feeding your babes — how many of you are disciples of baby-led weaning, I wonder?  I love the idea in concept — basically, you steam whatever you’re eating and cut it into matchstick shapes that baby then gnaws on (think broccoli, carrots, even strips of steak –though, heads up: I believe most pediatricians recommend waiting on this approach until the baby is six months).  The notion appeals to me in that Mr. Magpie and I have always rallied around the idea of making one dinner and having the entire family eat the same thing, no separate meals for picky palates involved.  (Will I laugh at myself in retrospect for advancing this dream?)  At any rate, maybe I will borrow from this philosophy when mini is at an appropriate age.  I have also generally preferred steaming or mashing mini’s food myself, though I am 100% on board with using jarred baby food whenever reasonable — on vacation, or, as happened this past weekend, when I decided I wanted to feed her an apple and found that a little jar of organic Beechnut baby applesauce (ingredients: apples) was in fact cheaper than buying an apple, not to mention more convenient than having to simmer said apple until mushy, mash to a pulp, etc.  While at the grocery, I also snagged a little pouch of cherry and oats by Plum Organics, figuring that cherry would be another fruit somewhat difficult to prepare for mini.

In short, I’m all over the place when it comes to approaches — I’ll try a little of everything, I think — so long as the ingredients are pure and simple.  Overall, I’d say the only thing I’m a bit fanatic about is exposing her to as many flavors as I can during her first year of life.  In fact, during her entire life.  Though I rather fastidiously avoid mommy forums and over-reading on any baby topic (for some, reading as much as possible on these topics is empowering; for me, it’s paralyzing and overwhelming), I did read that the more flavors you present to your baby during her first year of life, the less likely she is to be a picky eater.  This makes intuitive sense to me.  So I’m going to try everything.  Beets, even — though the ramifications of such a food in a baby’s hand are slightly terrifying (#redrum).  The other mantra I’ve taken as my own comes (per usual) from my mom, who said: “Even if she doesn’t like something today, try it again in another week or two.  Don’t give up.  Sometimes, on the third or fourth introduction to something, she’ll suddenly take to it.”  I like this strategy.

At any rate, per usual, I’ve taken strange delight in finding the best baby gear for the task at hand — below, my favorite items.  You can click the items in the collage below to be taken directly to details, or read my notes below.  I’ve sort of stuck to a green/aqua color palette for all of mini’s feeding gear and I don’t know why, but it makes everything feel kinda consistent, so I’ll keep at it.  (Also, in case I have a second mini, green seems suitably gender neutral!) 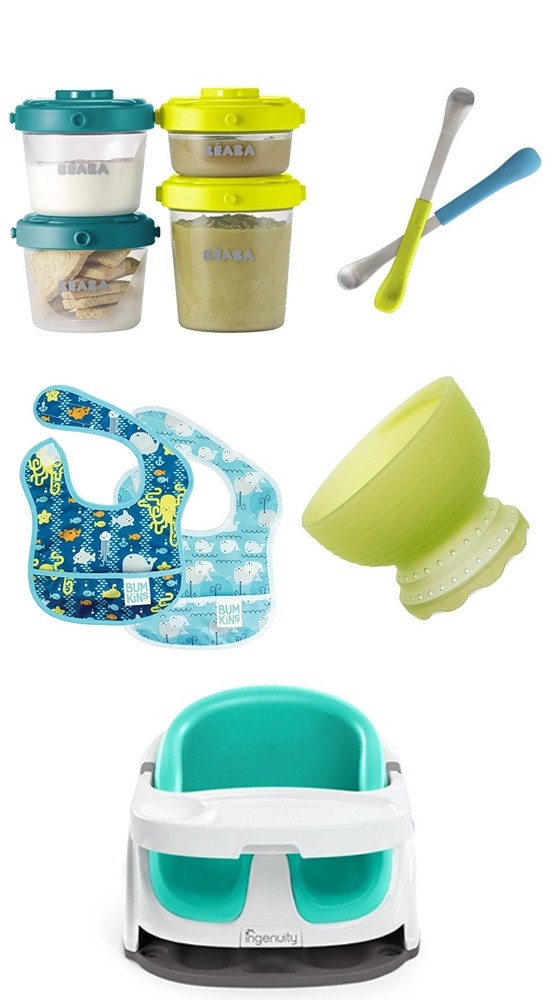 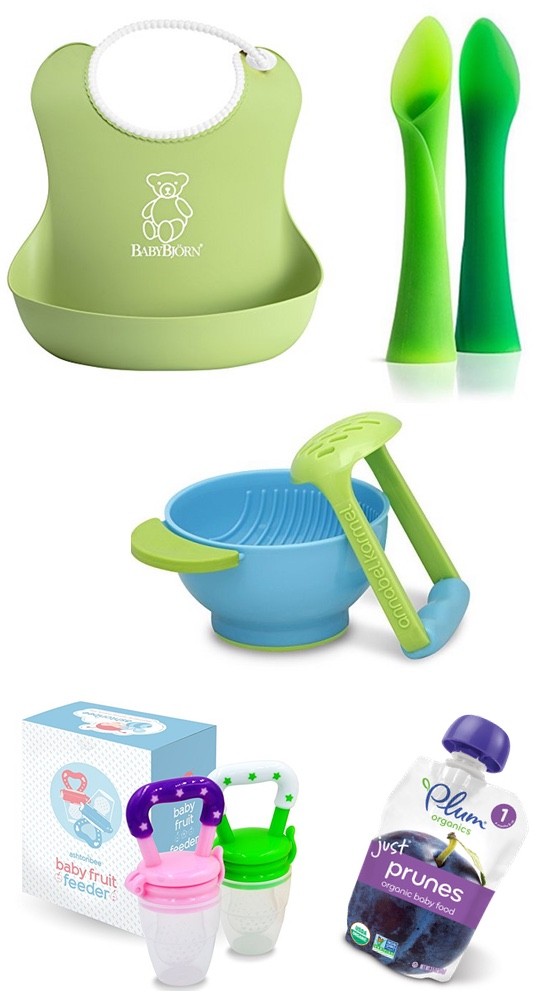 Beaba Baby Food Containers, set of 6 for $16 — these are awesome because they’re super tiny and therefore appropriately sized for the amount of food I’m feeding mini at the stage, and they clip onto one another so you can easily stack them in a fridge or your diaper bag without losing them.  They’ll also be great snack containers as she enters toddlerhood.

Boon Baby Spoons, 2 for $12 — I have actually only been using the Olababy spoons below so far, but these got SUCH incredible reviews (who knew baby spoons could be such a divisive topic?) that I ordered mini a pair to use as she continues to experiment with new foods.  Lots of favorable reviews based on the itty bitty size of the spoon, which is just big enough to serve the right amount of food.

Bumkins Waterproof Starter Bibs, 2 for $5 — These have been perfect for mini’s first forays into food.  They’re petite so they don’t overwhelm her frame (some of these bibs are ginormous!), I can rinse them right off in the sink, and apparently they’re machine-washable, too.  Plus, cheap cheap cheap.

Olababy Baby Food Steamer Bowl, $12 — This magical little contraption is microwave-safe, suitably small for a child, and doubles a steamer (!!!)  You can plop it right over some simmering water so you don’t need to dirty your steamer insert.  Hallelujah.

Ingenuity Baby Seat, $44 — We’ve opted to use this instead of a high chair for now, and I love being able to sit her in it right on our kitchen counter.  It’s small, portable, and comes with a tray.  (I will also sit her in it right next to me at the kitchen counter while I’m working — she’s my little blogging assistant.)  She loves the vantage point and, in general, loves to be seated upright these days.  Easy to clean, too.

Bjorn Soft Bib, $9 — Sort of the stage 2 bib for mini, once she starts taking bigger bites and ingesting more food.  Also very easy to clean and I have it on good authority that anything with a velcro becomes a nightmare if you want it to last for more than a few months around food and water.

Olababy Training Spoons, 2 for $15 — If you buy nothing else from this roundup, buy these.  Mini loves them.  They’re 100% silicone, so they double as a teether, and they have a nice width to them that make them easy for her to grab.  Because they’re short and stubby, it’s easy for mini to get the tip of the spoon into her mouth, too — the first time we introduced food to her, she started feeding herself with it!  Because they’re made of soft silicone, I’m also not worried she’s going to somehow poke herself in the eye or jam it too far down her throat.  Finally, easy to wipe clean (but also dishwasher safe).

Nuk Mash N Serve Bowl, $8 — I use this on the regular.  Throw a few chunks of pear or banana in there and just mash away.  The ridges on the inside of the bowl make it super easy.  Dishwasher-safe, too.

Ashtonbee Baby Fruit Feeder Pacifier, 2 for $13 — This is a great little doodad — I put frozen berries in it and she chomps on the end.  Great for teething and also for introducing her to fruits that may otherwise be a little harder to mash up.  My sister-in-law had used something similar with a mesh ending and remarked how much easier it is to clean mine since it’s made of silicone!  (I also like that these come with little plastic caps, so if mini doesn’t finish hers in a sitting, I can pop it back into the freezer or into my bag or whatever.)

Plum Organics Stage 1 Pouches, 6 for $8 — As noted above, I plan to feed mini some of these organic pouches for some of the more unusual flavors that may be harder to prepare or just cheaper to buy in this format!

P.P.S. — We just got mini this activity center and she is freaking OBSESSED with it.  I shared my wishlist of minimagpie items for the 3-6 month age range a few weeks back, and I’ll have to do an update on what we actually ended up buying and what our thoughts were!

P.P.P.S.  — PLEASE share your thoughts on feeding babies in the comments below!!!  Any gear I’m missing?  Approaches I’m neglecting?  TELL ALL.