I recently organized my book round-ups and more literary-minded posts into a new Magpie Book Club category because I have started to receive so many inquiries and comments about what I’m reading, what you’re reading, and what these texts signify to us that I wanted to make them more discoverable, admittedly, in part, for my own convenience and vanity, as I will occasionally go back through these posts and contemplate revisions or cringe at observations or nod in assent at an opinion that has since calcified.  (I also spend a lot of time reflecting on the cultural phenomena I’m consuming in my Weekend Vibes posts, under the #turbothot sections, but those are more off-the-cuff, half-formed musings than anything else.)  If you’re looking for more book recommendations, check out the books section on Grace’s lovely blog, The Stripe.  She is a voracious and judicious reader — I appreciate that she has opinions on things, including ones that occasionally run counter to predominantly held views, like her critique of Ann Patchett’s Commonwealth.

Right now, I’m nearly done with Chuck Klosterman’s But What If We’re Wrong? and, while I jokingly commented that it’s left me wondering “what’s north and what’s south, or if those cardinal directions even exist,” its initial shock value has since eroded and the book now feels like a pleasant brain teaser for the MENSA set.

On second thought: I’m being uncharitably flippant with that commentary, because it has led to some interesting soul-searching.  In the book, Klosterman takes an intentionally contrarian view on, well, everything, boldly albeit humbly egging on the likes of Neil deGrasse Tyson (celebrity astrophysicist — yes, that’s a thing — whose names I can never recall in proper succession — “Tyson deGrasse Neil?”, “Tyson deNeil”? etc — and who, if Klosterman’s portrait is to be trusted, comes off as a rather unlikeable pompous jerk) and experts on everything from rock music to American football, always asking them: “But what if…?”  His basic thesis is that for centuries at a time, humanity has held specific sets of perspectives that are considered “fact” or at least incontrovertibly true in a more vague social consensus kind of way, i.e., “the world is flat” or “our is the only universe” or “Moby Dick is an unimpeachably good book,” and that these assumptions are eventually found to be inaccurate or out of vogue and are in turn discarded for some other set of perspectives — “the world is actually round,” “we’re one universe in a multiverse,” and “actually, Junot Diaz’s This Is How You Lose Her is the greatest American novel.”   (In fact, that last opinion is one I can get behind.)

Klosterman asks: what are those assumptions that we hold right now that will eventually be debunked or scoffed at?  He proposes such outlandish thoughts as: maybe we are all living in a simulated reality and some teenager is actually controlling the conditions of the world we perceive to be reality; maybe American football will die as a national pastime within our lifetime; maybe the sitcom Roseanne will eventually be considered the greatest representation of American culture in the 90s.  He has an affable way with words — winking and self-deprecating and occasionally irreverent, sort of the literary equivalent of a Rupert Everett or Hugh Grant at a dinner party — and I’ve learned a lot from the book (like, a lot a lot, and about things I should know more about, i.e., quantum physics, though in the broadest brush-stroke imaginable), but the book’s principle merit–and here’s where the soul-searching I mentioned at the outset comes in–is the prototype of the author’s persistent curiosity about the world around him.  It’s nudged me to think more critically about, well, everything.  Such interrogations are a good thing both on the level of personal intellectual health and also on the level of social awareness.  At one point late in the book, Klosterman writes specifically about this when he says, in response to someone who asks him whether it’s terrifying to live in a world where he’s questioned everything: “I think there’s great detriment with our escalating progression toward…the increasingly common ideology that assures people they’re right about what they believe…It hijacks conversation and aborts ideas.  It engenders a delusion of simplicity that benefits people with inflexible minds.  It makes the experience of living in a society slightly worse than it should be.”  Here, here.  Curiosity is famous for killing the cat, but it can also be deeply generative–and I’ve come to see it as the mark of a truly smart person: does she question things, humbly and without posturing as a know-it-all?  Does she genuinely wonder about the world around her?  Is she able to advance an alternative perspective without coming off as strident or holier-than-thou?  I want to be that kind of person.  (And, to bring it all full-circle, Grace at The Stripe seems to be that kind of person, too.)

So, thanks, Klosterman, for the unexpected reminder.  (And also, for excellent fodder for any upcoming cocktail parties I may have on my agenda: I wonder how folks will respond when I tell them that some say American football may go by the wayside by 2045.)

Overall, I’d give this book a 3.5 on a 5 star scale, and I already know Mr. Magpie will take me to task for the sloppy rating: any time we watch a movie, we force ourselves to rate it on a scale of 1-5, with no half stars possible.  Mr. Magpie insists that adopting more of a binary approach (it’s EITHER a 3 or a 4, NO MIDDLE GROUND) elicits a more truthful response.  But, Klosterman deserves a 3.5, and that’s what he’ll get today.

OK, now, on a slightly tangential topic: I receive a lot of emails from retailers and brands asking if I’d like to feature their products and I often turn them down mainly because I like to have complete freedom when it comes to writing about what I want to write about, but Arhaus asked how I’d decorate the reading nook of my dreams and I thought — “Well, hm.  That’s a lovely provocation for a bookworm like myself.”  (Arhaus is not sponsoring this post, but I liked the question too much not to give it some thought, and they also have an incredible selection of living room / reading nook statement pieces that had me daydreaming for hours.)  Some inspo, courtesy of Pinterest: Below, the products I’d choose for the reading nook of my dreams.  First, a big armchair in a bold print ($1,699) and matching ottoman ($899).  The higher the back the better.

Next, the bookcase of my dreams: who doesn’t want a laddered bookcase ($2,999)?!  Very Belle in Beauty of the Beast.  Also, I’ve been putting off the purchase of a bookcase for a long while — and they instead sit in unseemly stacks on my bedroom floor — because Mr. Magpie and I have planning to install built-in bookshelves in our basement at some point.  But this piece is epic.  I’m actually now convinced I need a laddered bookcase, and I love the glossy lacquered black below.

Maybe some custom draperies made out of Brunschwig + Fils’s classic Les Touches print ($1100)?  (This Etsy store has the most incredible collection of fabrics!!!) For accoutrements (you can click the images in the collage below to be taken directly to details, or see the details below): 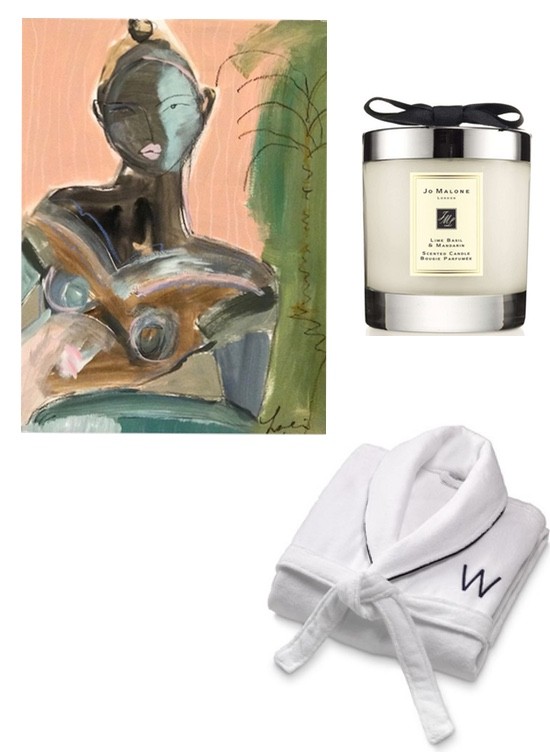 +I saw the super chic blogger Arielle of Something Navy raving about this Jo Malone Lime, Basil, and Mandarin scent and have been dying to try it since.

+Because every hero needs her cape.  But also, THIS ONE.  In the words of Robert Baratheon: “Seven hells, woman!”  (I need it!)  (Mr. Magpie and I use this phrase all the time like the Game of Thrones nerds we are.)

+I’m obsessed with this gilded mini bud vase ($11).  How chic would it look on your bedside table with a rununculus floating out the top?  (This one is also adorable.)

+Someone recently asked me for rug recs — I would also add this neutral basic (on sale at West Elm!) to the mix — looks like it has a lovely texture and decently thick pile and would go in just about any room.  Also, the name makes me think of curling up with a good book by the fire.